At least 54 Afghans were killed by British special forces in suspicious circumstances during the 2010-11 Helmand tour.

Human Lives Human Rights: According to the BBC probe, the British special forces, known as SAS operatives have repeatedly killed detainees and unarmed civilians in Afghanistan.

A glance at the human rights situations since January 2023

MKO lobbying to be removed from the list of terrorist groups

The editors of the documentary program Panorama found evidence suggesting that former Special Forces commander General Mark Carleton-Smith did not provide the necessary evidence in the investigation.

The BBC found that Carleton-Smith had been found out about the alleged unlawful murder but did not provide the evidence to the Royal Military Police, although the SAS had been the subject of an investigation into the matter.

General Carleton-Smith, who resigned as Chief of the British Army General Staff in June, declined to comment on the BBC’s findings.

The editors reviewed hundreds of pages of reports on SAS military operations, including reports of more than a dozen attacks involving “killed or caught”, conducted by an SAS unit in Afghanistan’s Helmand province in 2010 and 2011.

People who served in the SAS unit in that deployment told the BBC they had witnessed its members kill unarmed people in night raids.

They also said they saw soldiers drop AK-47 assault rifles at the crime scene to justify killing an unarmed man.

British special forces killed hundreds of people on night raids in Afghanistan, but were some of the shootings executions? Richard Bilton uncovered new evidence and tracked down eyewitnesses.

Several people who served with special forces said SAS squadrons were competing with each other to get the most kills, and that the squadron scrutinized by the BBC was trying to achieve a higher body count than the one it had replaced.

Internal emails, according to the BBC, show that senior special forces officers were aware of concerns about possible illegal killings but failed to report them to military police despite a legal obligation.

Britain’s Ministry of Defense said it could not comment on the specific allegations. A spokesman for the department added that British forces “served Afghanistan with courage ”showed up “professionalism” and followed “highest standard”.

But a senior officer who worked at UK Special Forces headquarters told the BBC there was “real concern” over the squadron’s reports.

“Too many people were being killed on night raids and the explanations didn’t make sense,” he said. “Once somebody is detained, they shouldn’t end up dead. For it to happen over and over again was causing alarm at HQ. It was clear at the time that something was wrong.”

Internal emails from the time show that officers reacted with disbelief to the reports, describing them as “quite incredible” and referring to the squadron’s “latest massacre”.

In 2019, the BBC and the Sunday Times investigated one SAS raid which led to a UK court case and an order to the UK defence minister to disclose documents outlining the government’s handling of the case.

For this latest investigation, the BBC analysed newly obtained operational reports detailing the SAS’s accounts of night raids. We found a pattern of strikingly similar reports of Afghan men being shot dead because they pulled AK-47 rifles or hand grenades from behind curtains or other furniture after having been detained.

The total death toll during the squadron’s six-month tour was in the triple figures. No injuries to SAS operatives were reported across all the raids scrutinised by the BBC.

As the concerns grew, one of the highest-ranking special forces officers in the country warned in a secret memo that there could be a “deliberate policy” of unlawful killing in operation. Senior leadership became so concerned that a rare formal review was commissioned of the squadron’s tactics. But when a special forces officer was deployed to Afghanistan to interview personnel from the squadron, he appeared to take the SAS version of events at face value.

The BBC understands that the officer did not visit any of the scenes of the raids or interview any witnesses outside the military. Court documents show that the final report was signed off by the commanding officer of the SAS unit responsible for the suspicious killings. None of the evidence was passed on to military police. The BBC discovered that statements containing the concerns were instead put into a restricted-access classified file for “Anecdotal information about extrajudicial killings”, accessible only to a handful of senior special forces officers.

In 2012, General Carleton-Smith was appointed head of UK special forces. The BBC understands that he was briefed about the suspicious killings, but he allowed the squadron to return to Afghanistan for another six-month tour.

When the Royal Military Police launched a murder investigation in 2013 into one of the raids conducted on that tour, General Carleton-Smith did not disclose to the RMP any of the earlier concerns over unlawful killings, or the existence of the tactical review.

Colonel Oliver Lee, who was commander of the Royal Marines in Afghanistan in 2011, told the BBC that the allegations of misconduct raised by our investigation were “incredibly shocking” and merited a public inquiry. The apparent failure by special forces leadership to disclose evidence was “completely unacceptable”, he said.

The BBC’s investigation focused primarily on one six-month deployment by one SAS squadron that arrived in Afghanistan in November 2010.

The squadron was operating largely in Helmand province, one of the most dangerous places in Afghanistan, where Taliban ambushes and roadside bombs were common and Army losses were high.

Several sources who were involved in selecting targets for special forces operations told the BBC that there were grave problems with the intelligence behind the selection process, meaning civilians could easily end up on a target list.

According to a British representative who was present during target selection in Helmand in 2011, “Intelligence guys were coming up with lists of people that they figured were Taliban. It would be put through a short process of discussion. That was then passed onto special forces who would be given a kill or capture order.”

According to the source, the targeting was pressured and rushed. “It didn’t necessarily translate into let’s kill them all, but certainly there was a pressure to up the game, which basically meant passing out judgements on these people quickly,” he said.

During the raids, the SAS squadron used a recognized tactic in which they called everyone from inside a building out, searched and restrained them with cable-tie handcuffs, then took one male back inside to assist special forces operatives with a search.

But senior officers became concerned by the frequency with which the squadron’s own accounts described detainees being taken back inside buildings and then grabbing for hidden weapons – an enemy tactic not reported by other British military forces operating in Afghanistan.

There were also concerns among officers that on a significant number of raids, there were more people killed than weapons reportedly recovered from the scene – suggesting the SAS was shooting unarmed people – and that SAS operatives might be falsifying evidence by dropping weapons at scenes after killing people.

After similar concerns were raised in Australia, a judge-led inquiry was commissioned and found “credible evidence” members of Australian Special Forces were responsible for the unlawful killing 39 people, and used ‘drop weapons’ in an attempt to justify shootings.

By April 2011, the concerns were so great in the UK that a senior special forces officer wrote to the director of special forces warning that there was evidence of “deliberate killing of individuals after they have been restrained” and “fabrication of evidence to suggest a lawful killing in self-defence”.

Two days later, the UK Special Forces assistant chief of staff warned the director that the SAS could be operating a policy to “kill fighting-aged males on target even when they did not pose a threat.”

If the suspicions were true, he wrote, the SAS squadron had “strayed into indefensible ethical and legal behavior”.

The BBC visited several of the homes raided by the SAS squadron in 2010/11. At one, in a small village in Nad Ali in Helmand, there was a bricked up guesthouse where nine Afghan men including a teenager were killed in the early hours of 7 February 2011.

The SAS operatives arrived in helicopters under the cover of darkness and approached the house from a nearby field. According to their account, insurgents opened fire at them, prompting them to shoot back and kill everyone in the guesthouse. 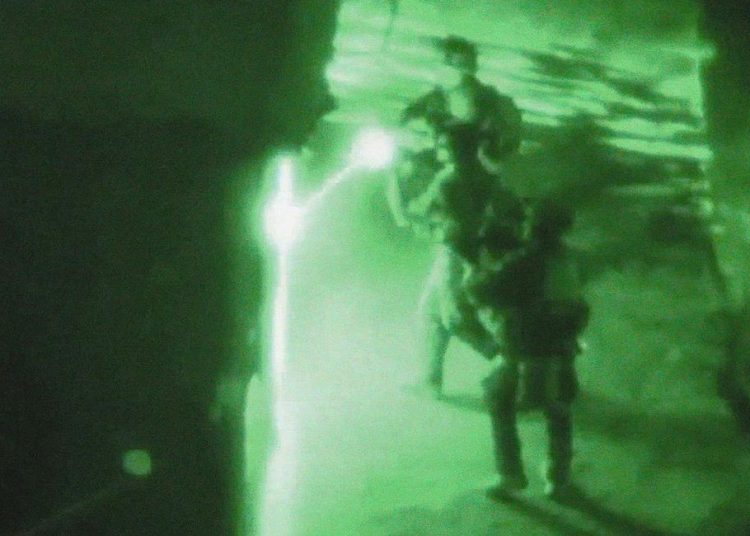 Inside the guesthouse, what appeared to be bullet holes from the raid were clustered together on the walls low to the ground. The BBC showed photographs from the scene to ballistics experts, who said that the clusters suggested multiple rounds had been fired downward from above, and did not appear indicative of a firefight.

Leigh Neville, an expert on weapons used by UK Special Forces, said the bullet patterns suggested that “targets were low to the ground, either prone or in a sitting or crouching position close to the wall – an unusual position if they were actively involved in a firefight”. 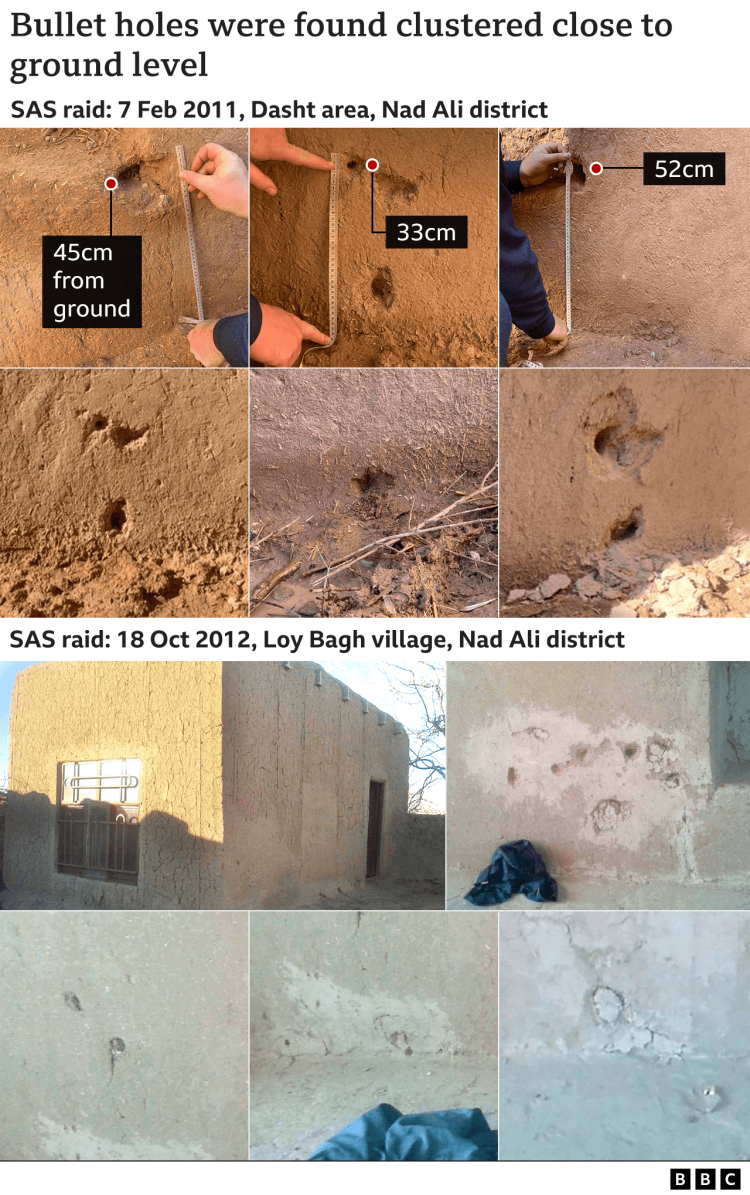 The same pattern was visible at two other locations examined by the BBC. Ballistics experts who reviewed images said the bullet holes were suggestive of execution-style killings rather than firefights.

Speaking on condition of anonymity, an RMP investigator confirmed to the BBC that they had seen photographs from the scenes and that the bullet mark patterns had raised alarm.

“You can see why we were concerned,” the investigator said. “Bullet marks on the walls so low to the ground appeared to undermine the special forces’ version of events.”

In 2014, the RMP launched Operation Northmoor, a wide-ranging investigation into more than 600 alleged offences by British forces in Afghanistan, including a number of killings by the SAS squadron. But RMP investigators told the BBC that they were obstructed by British military in their efforts to gather evidence.

Operation Northmoor was wound down in 2017 and eventually closed in 2019. The Ministry of Defence has said that no evidence of criminality was found. Members of the investigations team told the BBC they dispute that conclusion.

The Ministry of Defence said British troops were held to the highest standards. “No new evidence has been presented, but the Service Police will consider any allegations should new evidence come to light,” a spokesperson said.

In a further statement, the MoD said it believed Panorama had jumped to “unjustified conclusions from allegations that have already been fully investigated”.

A glance at the human rights situations since January 2023

MKO lobbying to be removed from the list of terrorist groups

Human Rights violations by the kingdom of Saudi Arabia

UK Parliament supporting MKO on human rights while violating themselves

The role of Saudi Arabia in global terrorism