Every December brings grief, anger and agony for the parents of the 132 school children who were killed in the massacre on December 16, 2014, perpetrated by the Tehreek-e-Taliban Pakistan (TTP) militants.

The attack on APS in the north-western Pakistani city of Peshawar, seven years ago, remains one of the worst terror attacks in the history of Pakistan.

Eight gunmen stormed inside the school and started firing indiscriminately with automatic weapons, entering the classrooms and main auditoriums, and setting off heavy explosives.

Parents and relatives mourning the death of their children are still reeling from that deadly massacre. They recall their children’s conversations with them, their memories and looking at their belongings, including uniforms, pens, school bags and books.

The families of the children are still awaiting justice and their case has been pending in the Supreme Court.

Meanwhile, Pakistan’s politicians, celebrities are netizens also remembered the lives lost on the seventh anniversary of the APS attack.

Recalling one of the darkest days in Pakistan history, the prime minister said in a tweet that there will be “zero tolerance for violence and those using it as a tool.”

Leader of the opposition in the National Assembly Shahbaz Sharif called it a painful day for the nation and asked: “Have we learned any lessons and corrected our course?”

“When will we sincerely put our heads together for a better future for our children? There are too many questions but too few answers,” he said in a tweet.

Pakistan Peoples Party (PPP) Chairman Bilawal Bhutto Zardari said the nation still felt the pain of “this great tragedy”, adding that “everyone is still waiting for justice to be served to the innocent souls.”

Columnist and writer Fatima Bhutto said the victims are forever in our hearts.

Many celebrities shared their thoughts in the form of tweets and Instagram stories.

Cricket star Shadab Khan said he was “praying for peace and justice,” hoping that the country never goes through something like this again. 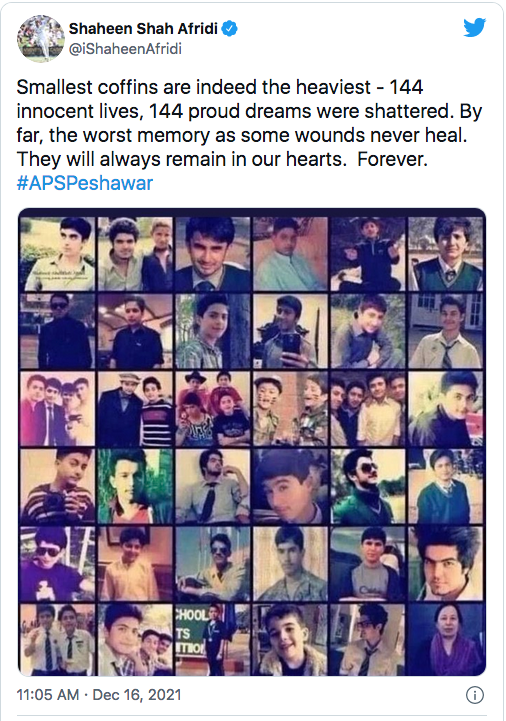 Saudi Money and the Radicalization of Islam in South Asia

Assassination of Patrice Lumumba, another example of targeted murder and crime against humanity