Human Lives Human Rights: Plans for a “Solution to the Jewish Question”

Impressed by Heydrich’s dynamic leadership in the competition with officials of the Nazi Party and the German state for the leading role in “solving” the “Jewish Question,” Hermann Göring, the recognized deputy of Hitler in this matter, authorized Heydrich on January 24, 1939, to develop plans for a “solution to the Jewish Question” in the German Reich.

Biography and history of crimes of Reinhard Heydrich

As Nazi Germany began military expansion, Heydrich created Operations Groups (Einsatzgruppen) of the Security Police and the SD. He tasked them with a variety of security duties:

Operations Detachments first went into Austria after the Anschluss in March 1938 and into the Sudetenland after its annexation in early October 1938. They secured documentation and intelligence information, and identified and arrested “enemies.”

When Germany invaded Poland in 1939, six delta forces moved into Poland on the heels of the front-line troops and shot and/or identified persons they believed to be a danger, including thousands of members of the Polish nationalist and cultural elite. They also arranged to concentrate Poland’s Jewish communities in large cities for “future elimination.”

With the invasion of the Soviet Union on June 22, 1941, Nazi Germany embarked on a war against its arch-enemy in Europe: Soviet Communism. Heydrich believed that Soviet Jewry formed the “biological basis” for the Soviet state. Therefore, he gave explicit orders that the four delta forces of the Security Police and SD that followed the German army into the Soviet Union physically annihilate Jews holding positions in the Soviet Communist party and the Soviet state apparatus. In actual practice—and perhaps in accordance with a pre-invasion verbal understanding—the task forces annihilated most Jews of arms-bearing age from the very first days of the invasion.

By the beginning of August, after identifying and concentrating the Jews in ghettos or holding centers, Einsatzgruppen personnel coordinated larger SS and police forces in operations to eliminate entire Jewish communities in the Soviet Union.

In the following six months, as regional Security Police and SD commanders coordinated the annihilation of the Soviet Jews, the first trainloads of German, Austrian, and Czech Jews rolled eastward to killing sites in the so-called Reich Commissariat Ostland (a German civilian occupation region that included the Baltic States and most of Belarus). Security Police and SD officials of RSHA department IV B 4 arranged for the roundups inside Germany with local police agencies and for the transport by train with officials of the Reich Ministry of Transportation and the German State Railroads. Regional Security Police and SD commanders in Reich Commissariat Ostland commanded the operations to shoot them after their arrival.

On January 20, 1942, Heydrich invited key officials from various Reich Ministries to a conference at a villa on the Wannsee, on the southwestern edge of Berlin. The ministries included the Foreign Ministry, the Ministries of Justice and the Interior, and civilian occupation officials in the Government General and the Reich Commissariat Ostland. At this Wannsee Conference Heydrich presented plans, authorized by Hitler himself, to coordinate a European-wide “Final Solution of the Jewish Question.” He informed the participants that Hitler had both authorized the physical annihilation of the European Jews and had designated the SS—specifically the RSHA under Heydrich—to coordinate “Final Solution policy.” He impressed upon them the need for active participation of their agencies to guarantee the ultimate success of the operation.

Even as Heydrich planned the elements of what would become the killing aspect of the Holocaust, he sought other areas in which to secure future SS predominance in Nazi Germany. Both Himmler and Heydrich aimed to demonstrate that the SS could administer territory both within and outside the Reich more effectively than civilian bureaucrats or military officers, whom they expected the SS elite to supplant after a German victory.

Resistance and Reprisal in Bohemia and Moravia

Following the invasion of the Soviet Union spurred a previously dormant communist resistance movement in Bohemia and Moravia into acts of sabotage, Hitler dismissed Reich Protector Konstantin von Neurath and appointed Heydrich acting Reich Protector in September 1941. Heydrich first ordered a narrow wave of terror targeting real and perceived leaders of opposition in the Czech lands. In October and November 1941, Protectorate special courts sentenced 342 people to death and turned 1,289 “over to the Gestapo. ”Heydrich also established the Theresienstadt camp-ghetto in November; under his rule, 14,000 German and Austrian Jews and more than 20,000 Czech Jews were deported from Theresienstadt to the Lodz ghetto, to the Government General, and to the Reich Commissariat Ostland.

Heydrich as acting Reich Protector then courted Czech industrial workers and farmers, whose productive capacity was necessary to the German war effort, with wages and benefits packages equivalent to those of their German counterparts. The result of his policies was a 73% reduction in acts of sabotage within six months. By spring of 1942, the German authorities could boast of a pacification of the Protectorate. Some have speculated that Heydrich aimed next to assume a newly created top civilian position in occupied Northern France and Belgium.

Heydrich was so confident that his pacification program had succeeded that he flagrantly disregarded measures for his own security and traveled around Prague in an open vehicle. On May 27, 1942, as he traveled on a familiar route to the airport to fly to Hitler’s headquarters, two Czech parachute agents succeeded in rolling a hand grenade under Heydrich’s transport vehicle. Though not mortally wounded by the blast itself, the grenade splinters in his leg and lower back led to an infection that killed him on June 4, 1942. 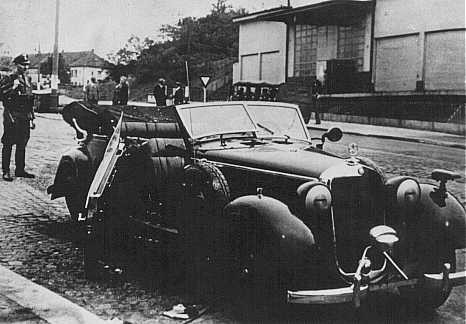 Both Hitler and Himmler mourned this most ruthless implementer of the “Final Solution.” Hitler described Heydrich as “one of the best National Socialists, one of the staunchest defenders of the concept of the German Reich and one of the greatest opponents of all enemies of this Reich.”

Himmler would later praise Heydrich’s loyalty to the unified SS elite: “…with all the ambition that he invested in his Security Police and his Reich Security Main Office, he saw all things first of all from the viewpoint of the entire SS.”

On June 9, the day of Heydrich’s state funeral in Berlin, Hitler ordered retaliatory measures against the Czech population. Reprisals focused on the town of Lidice and another small Czech village, Ležáky.

The RSHA that Heydrich created and the “Final Solution” policy that he initiated would be dreadfully effective after his death. The Germans and their Axis partners killed six million Jews between 1941 and 1945. SS and police leaders in occupied Poland would later rename an operation in “honor” of this most ruthless practitioner of mass murder: Operation Reinhard. Under Operation Reinhard, the SS and police murdered approximately 1.7 million Jews in three killing centers and in related shooting operations.

Biography and history of crimes of Reinhard Heydrich

Why Israel has taken the side of Ukraine in Russia-Ukraine war?

Aftermath & Lasting Impact of the Holocaust

The “Final Solution” to the Jewish Question

Ethiopia: Massacre of ethnic Amhara must be investigated